Walking Tours of Ottawa that Go Beneath the Surface 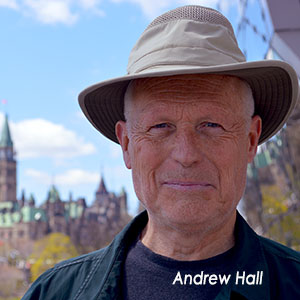 Hello, my name is Andrew Hall. I’m originally from Nova Scotia, on Canada’s Atlantic coast. I’ve worked as a journalist in the Maritime provinces, the Canadian Arctic and Ottawa. I spent most of my working life in the 1980s and 1990s reporting on Parliamentary committees.

I later worked inside the federal government, where for many years I made educational videos for the Bank of Canada’s currency museum.

I’m an enthusiastic amateur historian. Living in Ottawa, Canada’s national capital, has given me the opportunity and pleasure of enjoying Parliament and Ottawa’s downtown, touring the National Gallery and the other national museums, and continuously learning about the history of Ottawa and Canada down through the years.

I have a special interest in Canadian art and literature, and the connection with Canada’s aboriginal heritage. I enjoy talking about how these contribute to Canada’s ever growing sense of itself, as Canadians continue to come to terms with Canada’s colonial past.

If you want an informative and entertaining tour of Ottawa, by someone who loves to tell compelling stories, I invite you to come along on a walking tour with Ottawa In Depth. You won’t be disappointed.