Walking Tours of Ottawa that Go Beneath the Surface

This statue is impossible to miss, located outside the East Block along Wellington Street, at the top of the lawn facing down towards the War Memorial and Confederation Square. I walk by along the street many times a week.

The picture below is what the crowds see from Wellington Street. Three figures are facing toward the camera, the dominant figure with the raised arm is a Canadian militiaman, a farmer. Tucked under the farmer’s raised arm is an Indigenous scout who points out towards the War Memorial across Wellington Street. Closest to the camera is the figure of a soldier aiming his musket, from a British Army unit recruited in Newfoundland. 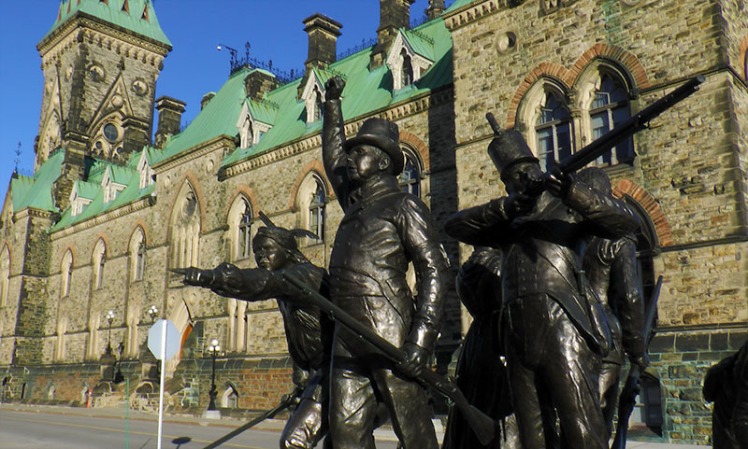 The other figures in the monument are a Métis militiaman, a Quebec soldier of the Canadian Voltigeurs (a French-speaking militia unit serving in the British Army during the War that was organized in Lower Canada and commanded by Lieutenant-Colonel Charles-Michel d’Irumberry de Salaberry) who is being bandaged by a female figure, and a Royal Navy marine.

So there you go, a gang of plucky proto-Canadians, indigenous and settlers together (along with the Royal Navy marine) fending off the American invaders, and let’s not forget about the 1815 burning of the White House either. The problem with this storyline is that it’s mainly a fraud.

For the British themselves, the War of 1812 is usually viewed as a sideshow to their main event at the time, the struggle of the Napoleonic Wars.

In terms of historical significance, the War of 1812 was an important chapter in the existential struggle of the Indigenous tribes living in the Great Lakes and Mid-West area against the looming invasion of American settlers into the Ohio River country. But this monument tells nothing of that story.

This is the first sculpture on Parliament Hill that does not have a Parliamentary connection and that raises the question, why?

Why put this monument here? There are lots of other spots around Parliament and in parks close by. The people and families who sacrificed in the 1812 War are long gone. The 1812 War matters now only for what we today think it can teach us, or makes it worth celebrating. Why is the 1812 War so special that the 200th anniversary of a long ago war deserves a monument in a very visible spot on the Parliamentary lawn?

The first question to always consider with public commemorative art, is who is making it. The subject matter only matters because someone decided it does. So, who decided?

That’s my 2nd question, if the 1812 War is that important for Canada today that what exactly is the monument teaching?

The 1812 Monument presents a grouping of seven figures – a First Nations fighter, a Métis militiaman, a regular infantryman from the Royal Newfoundland Regiment of Fencible Infantry, a Quebec soldier of the Canadian Voltigeurs being bandaged by a female figure, a Royal Navy marine, and a farmer-militiaman.”

Now, what does all this mean as a war monument?

The Toronto sculpture who won the competition says she personally sees the sculpture symbolizing “..the incredible contribution of diverse Canadians and our ability to work together to achieve remarkable outcomes.. ”

Like winning the War of 1812 against the Americans? While the Monument commemorates the 200th anniversary of the War, the date of the unveiling commemorated the last battle of the war fought on Canadian soil, at a place called Malcolm’s Mills, near Brantford, Ontario.

The Battle of Malcolm’s Mills involved a party of American soldiers who had crossed at Niagara, were raiding up into Canada and had come across and routed a smaller combined force of British army and Canadian militia.

Like winning the War of 1812 against the Americans? This is a war where the crucial Battle of Lundy’s Lane, near Niagara Falls, in 1814 is a battle which both sides claimed they won!

And both sides at Lundy’s Lane suffered heavy losses. (In total, there were about 260 dead and another 1300 injured, but these were astronomical losses for the time.)

While the 1812 Memorial commemorates the 200th anniversary of a war that both sides are claiming they won, the unveiling date for the memorial was scheduled to commemorate the last battle of the 1812 war fought on Canadian soil. This was at a place called Malcolm’s Mills, near Brantford, Ontario.

Trouble is, this battle was a defeat for the British and Canadian side. It’s hard to fathom drawing attention to a Canadian defeat from 200 years ago.. during a raid by invading Americans? Do other countries celebrate their defeats like this?

Putting aside the sad story of Malcolm’s Mills, let’s look at the monument and judge it on its own presentation.

To me, the 1812 Monument conforms to a conventional set of assumptions or a narrative, that war is about individual courage and bravery, a narrative of Canadians coming together in defiance of and to repel invading Americans, a narrative that stereotypes and limits Indigenous participation in the War of 1812 to a supporting role in warding off the American threat against Canada and other British North American colonies.

It’s part of a larger narrative that ignores the enormous negative consequence the War of 1812 had for Indian land claims, especially in the United States but also in Canada and understands the significance of the War of 1812 only in terms of what it meant for white Canada and America. More to say on this in the future.